Thank you for continuing to follow us, the biomimicry fellows, as we continue to probe the depths of nature’s solution manual in search of sustainability. I find it a little ironic that I had the privilege to kick off the school year and now I will be closing out the first semester for the new biomimicry fellows. Over the last fifteen weeks we have been endeavoring to discover more about this thing we call biomimicry. I’d like to take a second to share a few of my thoughts that have been shaped this semester.

Mimicry is essential to the process of biomimicry. Within the context of biology and indeed biomimicry I would define mimicry as: assuming the characteristics of another object while maintaining some fundamental identity. 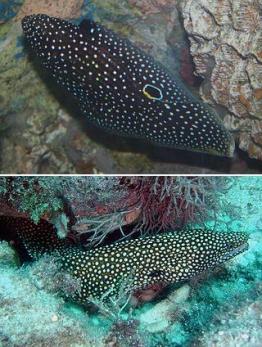 This marine betta (Calloplesiops altivelis), practicing Batesian mimicry, assumes the characteristic markings and behaviors of a moray eel, however this small predator is only dangerous to smaller fish and crustaceans. The eyespot and mottled patterning do not make the fish an eel; but they are leveraged to service the ecological needs of this small reef fish. Mimicry is different from copying. There the intent is to assume the identity of the source. An art forgery is intended to be so like the original that critics will accept it as such.

I had an opportunity to practice this myself in a project for a class this semester. I was working on a technique designed to track particle movements in three dimensions using a single camera. Normally we need two or more cameras to get depth information. Our eyes function in this stereoscopic framework. Our two eyes, slightly apart, focus on the same point and the brain can calculate the distance to the object based on the distance between your eyes and the angle they make when focusing. This type of binocular vision is very effective and seen throughout the animal kingdom. Except in jumping spiders.

These spiders have highly developed visual systems with camera eyes with lenses just like vertebrates. However these lenses are simply stuck in the carapace of the spider and cannot be moved in the same way human eyes can. Instead they have a rather ingenious retinal arrangement to generate depth information via defocus. Depth from defocus has been used to measure distances before but not in the way that these spiders do it. If light coming through a lens is out of focus it creates a blur (see the below diagrams). Using geometry you can use the radius of the blur and the lens focal length to calculate how far away the object is. Instead of experiencing the world like someone who’s lost their glasses the spider has two layers of photoreceptor cells.

In this arrangement one layer of cells sees a focused sharp image, it helps to be able to tell the difference between a fly and a bird. The other layer gets a defocused image that the spider’s brain processes as depth information, this helps in actually catching the fly.

Sounds like a good system to mimic for my camera setup. But I had to first consider my technical limitations. Inline sensors don’t exist in cameras, so  directly copying of the spider system wasn’t going to work. In this case I had to consider what the spider was actually doing, not how exactly it did it. The spider generates two images, a focused and defocused image. 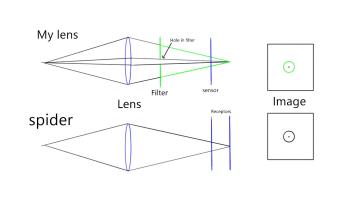 Particle image from my experiment. Focused particle in the center with associated blur halo

Biomimicry on any scale is going to require the researcher to abstract and adapt. Understanding is key. The ability to generalize the solution and understand its effects will make the process of integrating the biological system possible in the technological space. Very few examples of biomimicry are able to implement a biological strategy as is without any changes. Something to keep in mind as we all move forward exploring possible applications of biomimicry.

For more information on the spiders check out these videos: